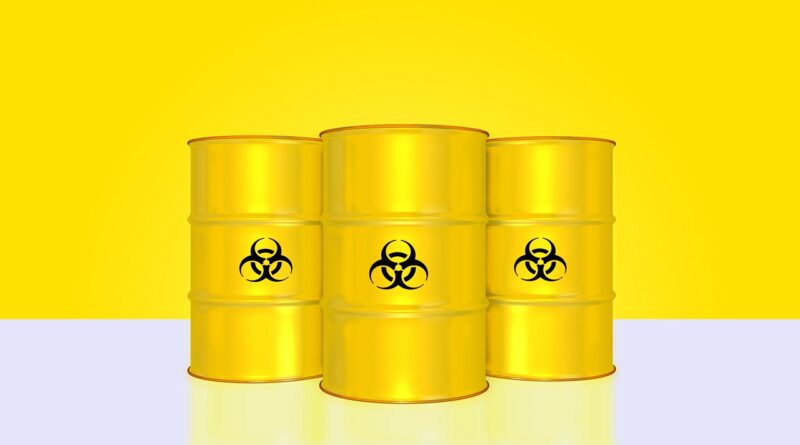 There is a lot of talk about it in the press: some countries « enrich uranium » beyond the authorized limits. What does this mean technically? I’ll explain it all to you in a very condensed and simplified way.

Note: this article is not intended to explain the geopolitical issues, including the military aspect, related to uranium and the nuclear energy sector in general. It only provides an explanation of the technical term « uranium enrichment » often presented by the press, notably in response to articles that appeared on the RTBF website[1] or in the newspaper La Libre[2] on April 16, 2021, following an announcement by the AFP.

Uranium is a natural, non-renewable, radioactive element whose natural abundance is greater than that of other elements such as gold or even silver. Uranium (presented by chemists by its symbol U) is found in the Earth’s crust, especially in granitic and sedimentary terrain, but also in the depths of some oceans. Seawater and spring water thus naturally contain traces of uranium.[3]

Uranium is not found « pure » in its natural state. It is often combined with other elements to form two main ores known as uranium ores, namely uranite (UO2) and pitchblende (U3O8). These ores are mined in some 20 countries around the world. Most of the mined uranium available on the market comes from Kazakhstan, Canada and Australia. In 2019, Kazakhstan produced the largest share of the world’s mined uranium supply (42%) followed by Canada (13%) and Australia (12%). [4] In 2019, this represented a global production of 54,752 tons of uranium, able to satisfy about 84% of global demand. Kazatomprom, a company wholly owned by the Kazakh government, is the world leader in uranium mining and marketing (more than one fifth of world production). [5]

Since the uranium content of the ore is quite low, and to minimize transportation costs, the ore is treated near the extraction site with chemical agents (concentrated acids or bases) to provide a “uranium concentrate » (>75%) (in the form of U3O8). This concentrate, called yellowcake, is then transported, traded on world markets and exchanges under the code of U3O8, before being purified, converted into uranium hexafluoride (UF6) before being enriched for use as nuclear fuel.[6]

Why is it necessary to « enrich uranium »?

For a perfectly pure sample of uranium, most of the atoms (about 99.3%) have a mass equivalent to 238 times the mass of a hydrogen atom, but other atoms have a mass of 235 times the mass of a hydrogen atom (about 0.72%) and a tiny portion of the uranium atoms in this sample are 234 times heavier than a hydrogen atom (0.0055%). Uranium is then said to be in the form of three isotopes, two of which are more abundant than the third, namely uranium 235 and uranium 238, which are symbolized respectively as 235U and 238U.

235U is the only naturally occurring fissile isotope, hence its interest in the nuclear industry in particular. The term fissile isotope designates, in a simplified way, a nucleus which is capable, when bombarded with neutrons, of disintegrating into lighter nuclei (with a chain reaction) and emitting energy. This nuclear fission is the phenomenon used in nuclear power plants to produce energy (in the form of electricity) or in some forms of weaponry (atomic bombs, among others).

As previously mentioned, 235U is the only fissile isotope. Enriching uranium therefore means “increasing the proportion of 235U in a uranium sample”.

There are various enrichment methods present at an industrial stage. They are based on the slight difference in mass between the two isotopes, 235U and 238U (235U is in fact a little lighter than 238U), and therefore on their difference in mobility under given conditions. Currently, centrifugation is the most widespread technique (Figure 1). In practice, uranium hexafluoride (UF6) is injected into a centrifuge rotating at high speed. Because of their difference in mass, the molecules of 238UF6 are thrown against the walls, while the lighter molecules of 235UF6 migrate towards the heart of the rotor. As the centrifuge is heated, a convection movement « pushes » the molecules enriched in uranium 235 (lighter) towards the top, while the molecules containing uranium 238 remain at the bottom of the device. 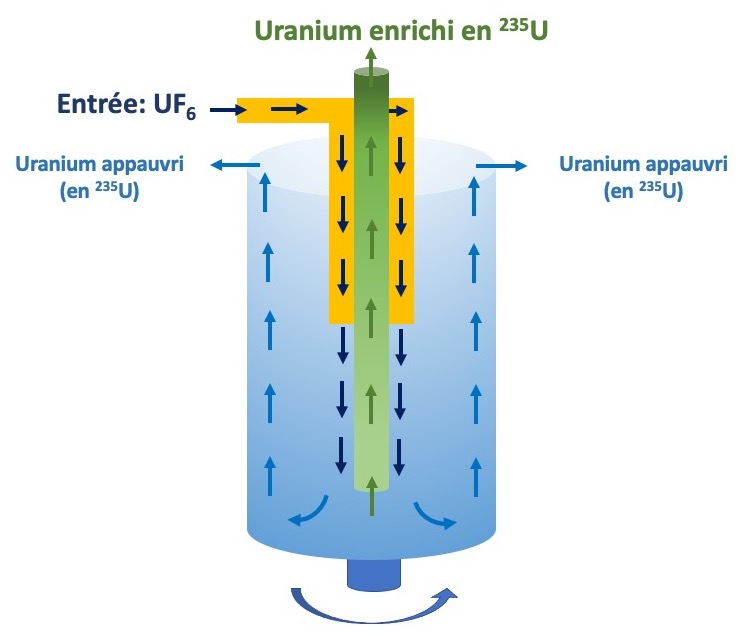 This device is the most frequently encountered (note that some alternatives exist, often more expensive, such as gaseous diffusion, dilution, etc.). The centrifugation process is repeated a certain number of times in series to obtain the desired 235U content.

Depending on the enrichment operation carried out, the way it is carried out (for example, the number of centrifugation cycles applied), it is possible to obtain different « types » of uranium that are suitable for different uses (Figure 2).

Figure 2. Different « grades » of uranium (from the native state to the enriched grades)

Low-enriched uranium is intended for use as fuel in nuclear reactors. Highly-enriched uranium is most often used in certain research reactors or to produce certain radioisotopes for medical use. Uranium enriched beyond 80% in 235U is, on the other hand, reserved for military uses, notably for the design of weapons, missiles, or nuclear bombs.

The control of uranium enrichment practices is therefore crucial, highly monitored and legislated. In April 2021, Iran announced the launch of production of uranium enriched to 60%, thus generating a serious breach of the commitments made to the international community. At the current rate of Iranian production, it would take the country a little less than a year to produce a critical mass of nearly 25kg of 90% enriched uranium needed to manufacture a nuclear weapon. [7]

Do not hesitate to contact me via the following email address: a.richel@uliege.be or via the form available by clicking here.